But what else used the palette-swapping technique before that?

In 1983, Mario Bros. was a 2-player game.  Following the trilogy of Donkey Kong, DK Jr., and DK3, Mario Bros. was the first Mario game to be 2-player, with the player Luigi using the Mario sprite in a different color palette. 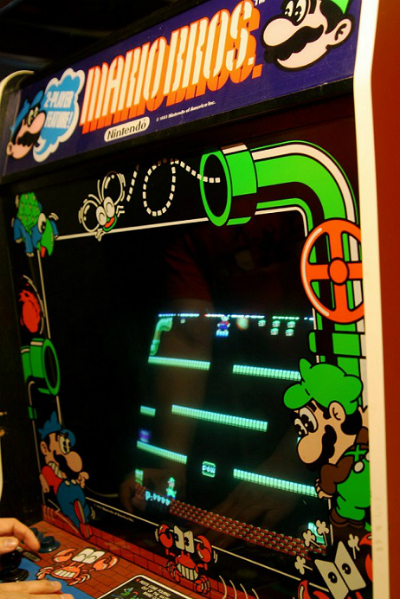 In the arcade cabinet artwork for Mario Bros., in 1983, you can see that already Mario was intended to have a cartoon-like, unrealistic shape and size, akin to the later Super Mario 64, rather than realistic.  Another interesting detail: although they both wear blue in-game, Luigi is wearing green and brown in this official cabinet artwork, something that would later be seen again in 1999's Super Mario Bros. Deluxe on the Game Boy Color. 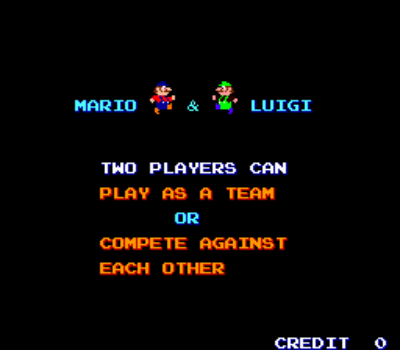 This is the Mario Bros. arcade machine.  As you can see, Mario and Luigi, in-game, were always meant to wear blue, along with red or green.  In this version, Mario's hat is blue.  This was the Sub-Zero and Scorpion of 1983. 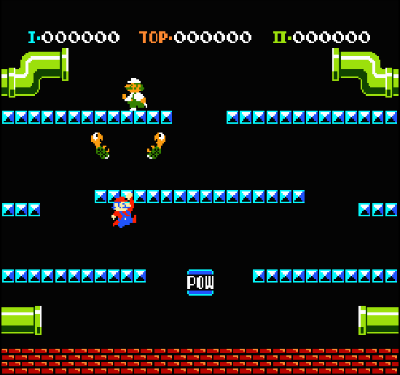 Palette swapping would be used again to create red turtles, separate from the green turtles.  A blue-and-pink turtle, when the last one rises back up.  Things of that nature. 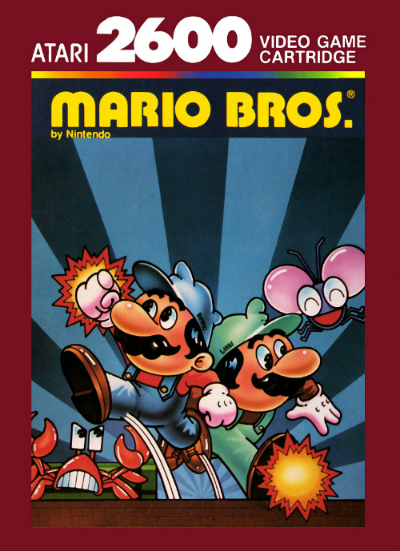 Some hysterical irony in this Atari 2600 cartridge's artwork.  The orange "boom" looks like the later Super Mario Bros. fireball.  Two bumps on their heads look eerily similar to the Racoon Mario and Luigi from Super Mario Bros. 3. 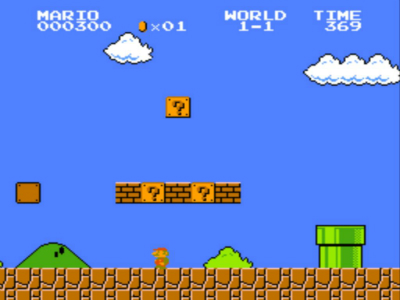 In Super Mario Bros. and the Japanese version of SMB2, Mario and Luigi use the same sprite, in differerent colors.  Luigi wears green and white.  Mario appears to wear red and brown, using the same color palette as the question blocks and ground, but in the story Mario was intended to wear red and blue.  Later, in Super Mario Bros. Deluxe, on the Game Boy Color, in 1999, Mario wears red and brown in-game while Luigi wears green and brown in-game. 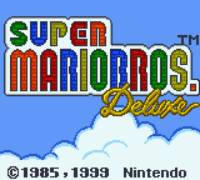 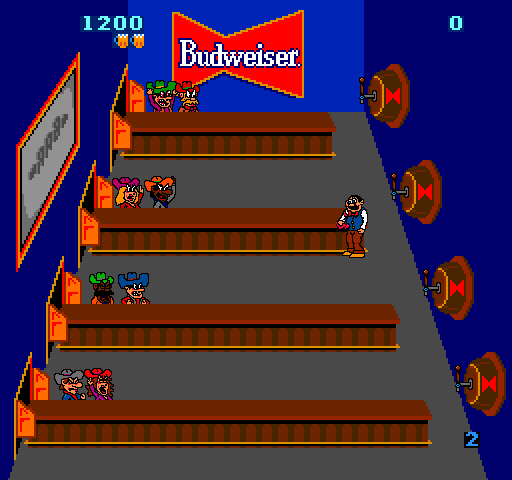 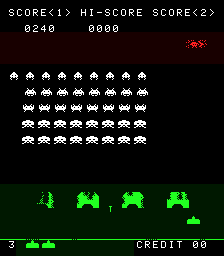 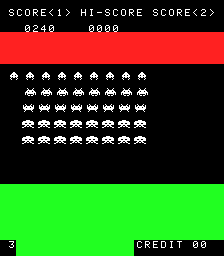 In that green zone, everything will be seen in just black and green, one shade of each. In the lower-left corner is one small square with the black and white color palette. In the lower right is a rectangle with that same color palette. The UFO passes horizontally through the red row. Therefore, as the player, your laser becomes green, white, and red in its travel upward through space.

The point is, that is how one sprite appears to go through change of color. 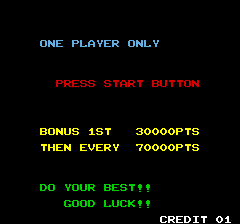 Each letter of the alphabet, plus the ! symbol, is drawn ONCE, but represented in FIVE colors - at the same time!! You can imagine how the horizontal rows of color-palette schemes are positioned. (If only real life was like that!) 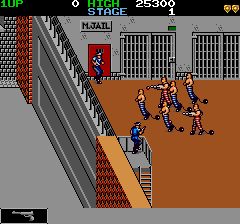 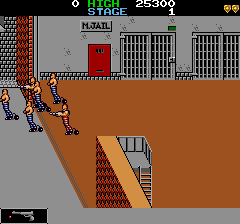 In the 80's, video-games that were imagined to be giant, at a large, epic scale, were technologically limited, and these limitaitons in space and sprite storage forced the creativity of video-game developers to use "palette-swapping" to get extra mileage out of bad guy sprites. They may wear blue OR red! This was common in many video-games.

TMNT was a comic book in 1983.  They all wore red, in this black-and-white comic book.  In the 1987 TV show, they wear different colors, and therefore, ninjas wearing different colors.  If you think about it, video-games based on the Turtles must therefore involve palette-swapping. 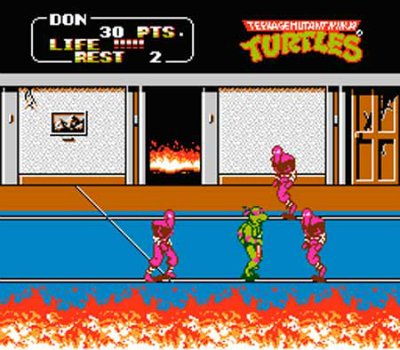 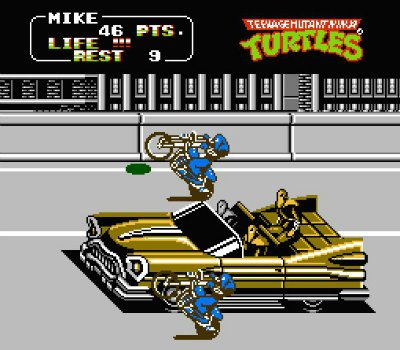 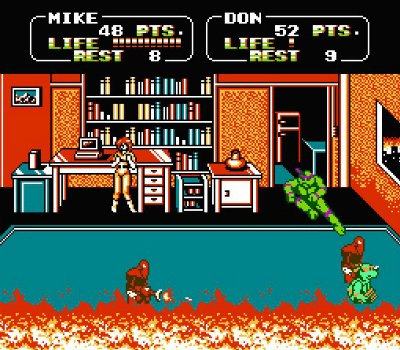 The four turtles appear to be palette swaps of each other, except for the weapons in their hands.  The jump-kick move, which only becomes an attack on the way down toward the floor, is the same for all the Turtles.  But!  Look at the enemy ninjas.  In the comics, they all wear black.  In the cartoon show, these ninjas turn out to be robots, and they all wear purple.  Yet here, in the game, it seems that you can encounter purple, blue, or red ninjas, even some white outfits not shown here. 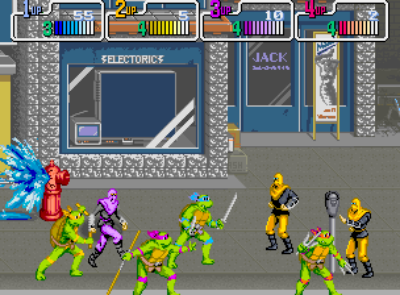 And this was very possible at Pizza Hut in the late 80's.

Mortal Kombat did not exist yet, and yet a multitude of ninjas wearing palette-swapped colorful outfits was already in use by something.  I don't remember any color but purple for the robots in the 80's cartoon.  The 1990 movie stuck more to the comics and had the ninjas wearing all black, with some red.  This colorful assortment of Foot ninjas, which I really believe happened only in the video-game, is interesting.

The actual four turtles are somewhat debatable.  Their weapons make them different, as well as the fighting stances and poses (Sub-Zero and Scorpion have also always differed in their stances and poses).  Maybe they just used one set of Turtle sprites, and had separate weapon sprites overlapping them, who knows.

To stretch out the purple ninjas into several colors is comparable to the Mario games doing that for the enemy turtles - sometimes green, sometimes red, in Super Mario Bros., and in the earlier Mario Bros.  Hmmmm.  Green and red.  Like the 1983 comic book turtles - green and red.

You know who did palette-swapping Japanese martial artists first?  THESE MOTHER-****ERS!!! 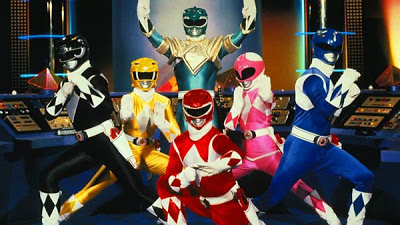 1993 was the first year it hit American TV, but it was derived from earlier Japanese TV, in which their version of the Pink Ranger detonates the enemy's entire building with C4 explosives.  I think the American version had toned-down violence.

And here they all are unmasked.  This was the Season One lineup that I loved in first grade.  After they dropped the Green Ranger, he returned as the White Ranger.  He is the only Ranger to really deviate from everyone else's costumes.  Look at the gold.  It looks kind of like Rain/Prince. 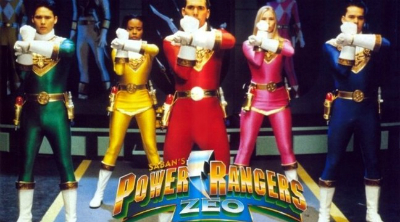 Then they got into other seasons, and they started over with different casts of actors every time, but: still a bunch of palette swaps.

Although this was a TV show first, if you think about it, video-games based on the Power Rangers would likely end up using that same palette-swapping technique. 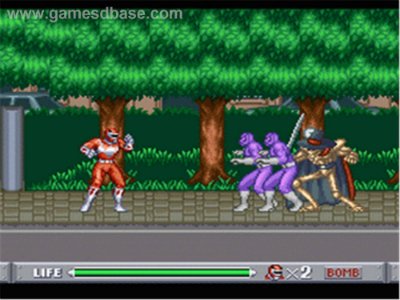 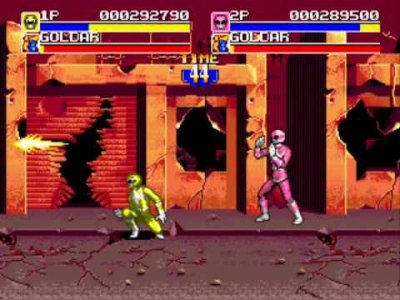 Well.  Clearly, palette-swapping was used in this game. 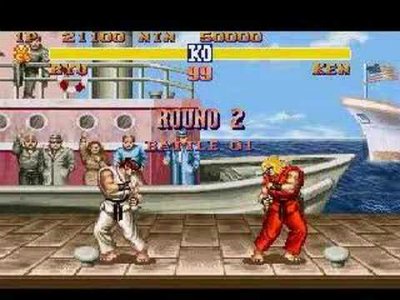 They are, after all, the same as each other, the white and red (flag colors of Japan?).  The head, hair, and face areas are all changed, but from the shoulders down the computer is using the same sprite for both characters. 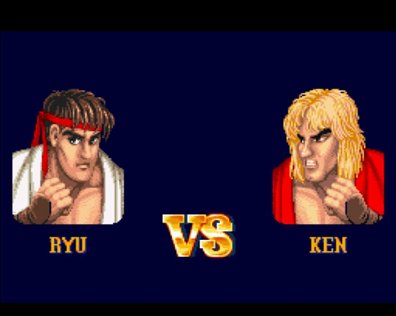 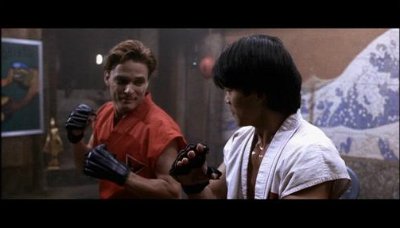 In the 1994 Street Fighter movie, which is based primarily on SF2 the Game, the outfits are shown, in a twist, to look different from each other, like MK4's Sub-Zero and Scorpion.  Ken's outfit is closed, and Ryu's is open.  Maybe the open outfit is meant to look like the Vs. screen, where it appears open.

The colors are all different from Street Fighter II.  Ken now wears purple, Ryu now wears light blue, Zangief wears green instead of red, and essentially everything is recolored.  Also, all the characters can now be played with 4 possible colors.  Yes, you can choose what colors you will appear as.

Super Mario World had also involved the entire world appearing different after you beat the game, and play it a second time in its Autumn mode.  The same sprites that made the backgrounds earlier now appear way different, like your hometown after 20 years. 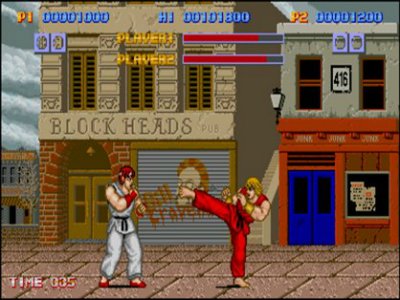 The first game, Street Fighter 1, from 1987, also involved palette-swapping, for Ken and Ryu.  But wait a minute.  What I'm about to explain might shock you.  Street Fighter was not a fighting game where you can play as 8 characters, like Street Fighter II, and then all 4 villains in SF2 Turbo, and then 4 newcomers in Super SF2.  No, in Street Fighter 1, Ken and Ryu are THE ONLY TWO characters in a 2-player game in which either Ken or Ryu embarks on the total journey to fight all the bad guys, finally ending with Sagat.  So, that 2-player game format of Mario and Luigi is likely what shaped Ken and Ryu.  In a 2-player game, you go up against a whole bunch of computer-controlled enemies, like Mario and Luigi going up against entire armies of monsters.  Street Fighter 2 had the brilliant idea to let you play as ALL the characters involved (except the 4 villains), and ever since that has been the expectation of all fighting games made.

Chun-Li, Zangief, E. Honda, and M. Bison are household names.  Street Fighter's cast and crew of people, including Joe, Mike, Geki, Adon, and Gen, would either remain unknown or be brought back in sequels.  In Street Fighter 3 we learn that Gen, from SF1, was Chun-Li's mentor.

That explains how you end up with the final result of Street Fighter 2, in which there are two characters palette-swapped except for the heads.

You know what else had it?  PAC-MAN.  In a 2-player game, the second player is a palette-swapped version of Pac-Man.  So, you see, these things have happened a little bit in video-games outside Mortal Kombat's ninjas.  Once again, Mortal Kombat's crew was:

More MK use of palette swapping was the Mirror Match, which displayed one's own enemy in a slightly darker shade of color, or in a drastically different color instead.  Green Sonya fights a red Mirror Match.  Perhaps the Mirror Match was inspired by the fact that the first working demo of Mortal Kombat, the arcade machine, was a match of Johnny Cage vs. Johnny Cage.  The loss of Jean Claude Van Damme as an actor in the game - first slated to play the star character of Universal Soldier, the Game - was considered a significant loss, but the MK team making the most of the situation by making Johnny Cage a character, an actor with the initials J.C., was what gave us this great character.

2-player Mortal Kombat matches, in which both people play as the same character, result in the Mirror Match palette in MK1 - Sonya vs. Red Sonya, for instance.  Everyone except Sonya simply fights a darker version of themselves, because in MK1, the costumes were all very simply designed, and were mostly one color (white, for Raiden).  In MK2, the Mirror Match was gone, but the changes in color remained in case of a character fighting himself.  Liu Kang, normally wearing red and black, fights a doppelganger who wears blue and black.  Although Scorpion's doppelganger is still simply a darker version of Scorpion, Raiden fights a red Raiden, and Kung Lao's double wears pants that look more biege than blue - more often is the difference between two of the same person the coloring.  In short, palette swapping still went on, in that sense.

There have actually been plenty of other video-games that have used palette-swapping.  Maximum Carnage even used palette swapping to turn one bad guy into 2 to 3 types of differently-colored bad guys.